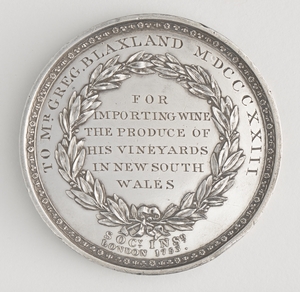 Actually below is an account of the second big award given to Australian wine although it mentions the first one awarded to Gregory Blaxland as shown above.

AUSTRALIAN WINE. — Having been politely favoured with the loan of the 46th volume of the ‘ Transactions of the Society of Arts, Manufactures, and Commerce,’ we have much pleasure in laying before our readers the compliment it pays to the wine of this Colony. On the fly-leaf is the following inscription :–

“GREGORY BLAXLAND, Esq. &c. &c. &c. New South Wales, received from the Society for the encouragement of Arts &c. as registering the premium awarded to him for the production of wine in New South Wales, and also as containing his valuable paper on the cultivation of the vine.”
“JOHN WALKER.” ” London, 21st January, 1830.”

The Preface contains the following observations :–
” The gold Ceres medal has been awarded to GREGORY BLAXLAND, Esq. of Sydney, in New South Wales, for a sample of wine, the produce of his vineyard in that Colony. Five years ago the large silver medal of the Society was conferred on this gentleman for a sample of wine from the same vineyard. The vines with which it is stocked are derived from a small cluster grape, supposed to be a seedling from one of the claret grapes originally introduced by Mr. BLAXLAND. Being a native of that colony, it endures the climate far better than any of the imported vines. The wine sent this year is decidedly better than that for which the former reward of the Society was granted. It cannot be expected that the produce of such young vines should have much flavour ; but as the stocks get older and less succulent, the quality of their juice will no doubt improve. At present, it is praise enough, that the wine is sound and perfectly free from that flavour which characterises, not advantageously, the wines of another British colony.”

Among the ‘ Papers in Colonies and Trade’ (pp. 133-135), is published the letter which Mr. BLAXLAND accompanied with his samples, to which the Society subjoin some further remarks of an encouraging nature.

” No. 1.— WINE FROM NEW SOUTH WALES. The GOLD CERES MEDAL was presented to GREGORY BLAXLAND, Esquire, of Sydney, New South Wales, for Wine, the produce of his Vineyard in that Colony.

75, Old Broad Street, Feb. 25,1828. ” SIR, – I have to request that you will lay be- fore the Society the enclosed bill of lading and other documents, respecting a pipe of wine, the produce of my vineyard in New South Wales last year, 1827, for which I beg to make my claim for the gold medal offered by the Society.

” I have also sent for their inspection samples of the two best half pipes, the one in pint bottles from No. 1, the other in quart bottles from No. 2. From experience, I find, that as the vines become more matured by age, the wine in every situation is of a much better quality. Before I make further observations on the quality of the two samples, it will he necessary to state, that the vineyard is situated on the side of a very steep hill. The cask No. 1 was made from the grapes which grew on the top of the hill ; they were the first ripe ; the soil thin and dry, totally unfit for agricultural purposes ; the other, No. 2, from grapes that grew on the centre of the hill, on a deeper and richer soil ; they were ripe in about a week after the first. More wine was made from the grapes at the bottom of the hill, where the soil is rich and deep, but it was of a very inferior quality ; which rich deep soil, from the experience I have had in the Colony, I consider totally unfit for the production of wine of value for commercial purposes, unless it is made into brandy soon after it has done fermenting, as it appears neither to possess flavour, nor the property of keeping long in the cask free from acid.

” It appears from the custom-house documents produced before the Committee, that Mr. BLAXLAND shipped at Sydney, on the 5th of February, 1827, three half pipes of Colonial wine, the produce of his own vineyard ; ten per cent of French brandy having been previously added to it, in order to enable it to bear the voyage. Of the two half pipes, which, on their arrival in the Thames, appeared to be the best, Mr. BLAXLAND sent samples in bottle.

” The grape from which the whole was made is a small black cluster grape, supposed to be a seedling from the claret grape, as mentioned in Mr. BLAXLAND’S letter, printed in the 41st volume of the Society’s Transactions.

” On tasting the sample, it was the general opinion that both of them are decidedly better than the wine for which, in 1823, Mr. B. obtained the large silver medal of the Society, and that they were wholly free from the earthy flavour which unhappily characterises most of the Cape wines. The colour of the wine is a tawny red.”

We hope this will furnish an additional inducement to our settlers to form vineyards, and to aim at the production of wine.